Built in the 1930s when the park was first opened, Elk Prairie has a pleasant, woodsy small-campground feel and central location that you don’t get in newer campgrounds.

The campground itself doesn’t have any old-growth redwoods; most sites are in the shade of leafy hardwood trees just outside the old-growth forest. But it’s just a few minutes’ walk from Prairie Creek’s visitor center and the main trailhead with its incomparable selection of old-growth redwood trails. No other campground has such a large number of world-class redwood hikes within walking distance.

The campground is well away from Highway 101, so there’s very little traffic noise, just the occasional whoosh of a car driving by on Drury Parkway. The separation between sites is about average for a state park campground, but most sites are pretty well screened by vegetation.

The best campsites are the ones right along Prairie Creek; a few even have views of the rushing creek and an old-growth spruce grove a few yards away, but vegetation screens the views from most other sites. A few sites are out in the open sunshine next to Elk Prairie. These sites are in a little depression so you can’t actually see Elk Prairie, just a 10-foot-tall embankment.

There’s a maximum of 8 people per site. RVs up to 27 feet and trailers up to 24 feet are allowed, although not all of the sites have a big enough pullout to park a motorhome. Like most state park campgrounds, there aren’t any hookups.

The campground is open all year, but the northern loop (sites 8 – 48) is closed in winter. There’s no cell phone service in the campground or, for that matter, anywhere in the park.

Campsite 40 is on Prairie Creek

Sites 1 – 4 have wooden cabins that cost $80/night in winter and $100 in summer. The cabins are new and sparkling clean, but very basic. Each cabin has four bunk bed platforms and nothing else; you need to bring your own bedding, and there isn’t even any place to sit other than the beds. There’s no bathroom, so you have to use the campground’s bathroom/shower building. There’s no kitchen and you’re not allowed to use stoves inside, but you do get an outdoor fire pit just like the regular campsites. The cabins do, however, have heat and electrical outlets. All the cabins are wheelchair-accessible.

This Los Angeles Times article has a couple of good pictures of the cabin interiors.

The state park cabins shouldn’t be confused with the much larger, privately-owned Elk Meadow cabins a few miles down the road.

At the south end of the campground is a hike/bike area, part of a network of campsites for long-distance cyclists or hikers who may not be able to predict where they’ll be on a given day. The area has 7 picnic benches and is supposed to accommodate multiple groups, up to a total of 8 people.

The area is a few steps away from the main campground so it’s a litle quieter and doesn’t have cars driving by. The picnic benches are scattered around an open grassy area under some small trees. Most are right on the little-used Davison Trail; a few are set back in the woods.

Hike/bike camping is $5 per person (payable at the entrance kiosk) and is available on a first-come, first serve basis. Oddly, although the hike/bike area is just 10 yards from the regular campsites, it’s considered a backcountry campsite so fires aren’t allowed. There’s a single food locker for the whole area.

Site 20, with the camp host’s RV in the background.

Site 22 is an ADA site. The north end of the campground is heavily shaded with small redwoods.

Site 65 has some old-growth spruce trees

Site 71 is in a little depression next to the prairie

Site 56 has a little path to the creek

Site 59 is next to some spruce trees 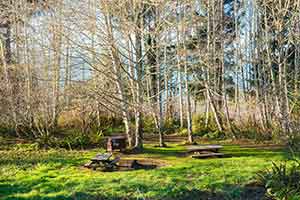