The last bridge on the trail has been closed since July 2015, cutting off access to the beach. The bridge crosses a little canyon that looks way too deep and steep to climb into, although judging by the track worn into the vegetation, a few people have apparently been doing just that. The last time I was there, the bridge had been reopened (probably just for the day) by stringing up some orange netting in place of the missing handrails, so that a group of biologists could cross the bridge to do field work on the tidal flats.

The Damnation Creek Trail is one of the trails most frequently recommended by park staff, visitors, and guidebooks. It is, in fact, a really nice trail, with an 1100-foot elevation drop to add a little challenge, and a variety of pristine and very attractive woodland environments. Since it’s on a west-facing hill next to the ocean, the trail is often shrouded in fog from the summer marine layer, adding considerably to the primeval old-growth atmosphere. Even if it’s not fogged in, the Damnation Creek Trail makes an exceptional late-afternoon hike; when the sun is too low to illuminate other groves, leaving them in gloomy darkness, Damnation Creek’s hillside is still catching the golden light of the setting sun.

The big drawback of this trail is the presence of Highway 101. The really spectacular redwoods are all at the top of the trail where there’s also the most traffic noise. By the time the noise fades away, the redwoods are no longer as impressive. Also, although it’s on a steep hillside next to the ocean, the trail is wooded so there are no ocean views. To be fair, though, none of the redwood trails in Redwood National and State Parks have ocean views.

Although it’s not exactly crowded, this is one of the more popular trails in the park; on a summer weekend you might pass a group every 3 – 5 minutes.

The trail is a little tricky to find since it starts from an unmarked dirt pullout on the southbound side of Highway 101. The northbound lanes don't have any left turn or other provision for reaching the trailhead pullout. The pullout is at mile marker 16.

The trail begins with a climb through an exceptional grove of big redwoods. There’s a lot of variation in the size, texture, and colors of the trees. The redwoods grow out of a dense understory of rhodedendron and the tallest huckleberry shrubs I’ve ever seen. The huckleberry actually looks more like trees, reaching heights of about 15 feet. There are also lots of rhododendron trees, but I’ve never seen more than a few in bloom at any given time.

The larger trees are nearly all redwoods, with only a few Douglas-Fir trees mixed in.

After cresting the ridge, the trail descends through an even more scenic redwood grove. The understory mostly disappears on this side of the ridge and the woods become very open, with a brilliant green groundcover of ferns. Unusually for a hillside at this elevation, there are a lot of huge trees here; usually trees this big are only found in the lowlands. All of the trees seem to be arrow-straight and tall with elegantly fluted trunks, giving the forest a very stately, orderly look. The trees are a very light grey on the side that faces the ocean and a very dark brown on the inland side, so the forest looks dramatically different depending on which direction you look.

When the grove is enveloped in fog and the rhododendrons are in bloom, this is one of the most photogenic upland redwood groves anywhere. Cars whoosh by on nearby Highway 101 a few times each minute; between cars the distant hooting of Crescent City’s foghorn can sometimes be heard.

The trail briefly runs alongside the Coastal Trail, which is actually a paved road, then crosses it. At this point, the traffic noise fades away and the redwoods get a lot smaller. It’s still a very attractive redwood forest, though, resembling the uplands of Prairie Creek with its light-colored redwood trunks and understory of light-green huckleberry and ferns.

As the trail descends, the woods become more open and the giant huckleberry trees are replaced with normal-sized shrubs. The redwoods are a very light grey color, presumably bleached by the salt air; the color complements the light green of the understory.

Deeper into the fog on the Damnation Creek Trail

The redwoods end at around mile 1.5, giving way to a lush and attractive spruce wood with some pretty big spruce trees. The trail becomes rougher, steeper, and overgrown, and slumps precariously in a few places. The trail descends into a deep fern-filled canyon filled with the rushing sound of a creek and with a nice view of a spruce-covered hillside across Damnation Creek. Almost at its very end, the trail crosses a narrow gully and emerges onto a blufftop where the ocean finally comes into view. The final descent is on a rather precarious stairway crudely carved into the rock. At the bottom of the trail is a tiny cove with a narrow, rocky beach. There’s no sand and the beach may be completely covered at high tide, but you might be able to walk up and down the beach a little ways. If the tide is unusually low there may be tidepools.

The return trip, although uphill, is actually more enjoyable than the outbound trip. After an initial steep section the trail really isn’t that difficult, and the redwoods get progressively more scenic.

The trail ends at this small rocky beach 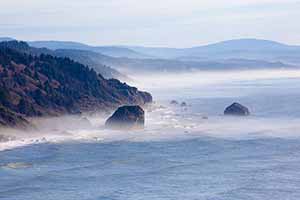 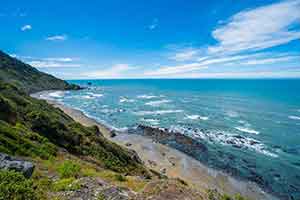 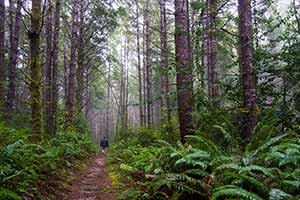 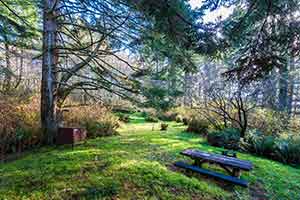