Sequoia and Kings Canyon National Parks have about a third of the world’s sequoia forest, mostly in unlogged condition. The parks have seven of the world’s ten biggest trees, and more old-growth trail mileage than any other sequoia park.

Not far from the sequoia groves are the distinctive granite landscapes and remote high lakes of the parks’s high country, which has some of the best hiking in the area. The alpine scenery can’t be seen from the road or from the sequoia groves, so you won’t really feel like you’ve been to the mountains unless you venture into the backcountry.

The best time to visit is from July through October, when temperatures are usually in the mid-70s, although some of the higher-elevation trails can still be covered with snow well into August. Rumbles of thunder and dark clouds building up over the peaks are common in summer, but rainfall is less common. July is the most attractive month, with lots of wildflowers blooming (especially the purple lupines that grow among the sequoias), but it also has the most bugs. Bug repellent is absolutely essential in July and August but unnecessary by October. It’s possible to visit the Giant Forest and Grant Grove in the winter, but the road between them is closed.

The Generals’ Highway in the Giant Forest

A large old-growth grove with the most scenic sequoia hikes. There are also some spectacular high country trails nearby.

A heavily-developed area that features the world’s second-largest tree. Nearby is the relatively undeveloped Redwood Mountain Grove, the world’s largest old-growth sequoia grove.

The canyon floor doesn’t have any sequoia groves, but offers a lot of challenging trails. Most of them are mainly intended for backpacking, but there are still some good day hikes.

An exceptional grove on a hillside above Mineral King Road. The grove has been partially logged, but not the parts near the main trail. Unfortunately, not a lot of the big trees can actually be seen from the trail.

Located right next to Atwell Grove, the East Fork Grove has a much different character, with only a few really big, widely-scattered sequoias.

The Ladybug Trail is a low-elevation trail that leads to a small outlier section of the Homer’s Nose Grove. A somewhat hazardous unmaintained trail continues to the outskirts of the South Fork Grove, but doesn’t actually reach any of its sequoias.

A long, difficult climb in a little-visited section of Sequoia National Park with some scattered sequoias. The high end of the grove has a few small but spectacular collections of large sequoias.

These webcams are helpful for checking how much snow is on the ground:

Almost all sequoia groves that aren’t in the national parks are in the Giant Sequoia National Monument.

The Giant Sequoia National Monument is still mostly closed due to extensive damage from fires in 2015, 2020, and 2021. The Long Meadow Grove (Trail of 100 Giants) is open.

The Monument is part of the vast National Forest system, which mainly exists to provide a souce of timber for the logging industry. Most of its sequoia groves have been partially logged, most egregiously in the 1980s when sections of many pristine old-growth groves were clearcut. Although the sequoias were left standing, the big trees tend to be widely scattered and are now oddly isolated in open fields. There are a few exceptions, though, mostly around Camp Nelson.

The Monument isn’t as scenic as the national parks: although the sequoias are just as impressive, they only appear along short sections of trail, and there’s no spectacular high country or craggy peaks.

On the other hand, it’s a lot easier to visit, with fewer visitors, no entrance fees, and fewer rules and regulations: you can camp for free in some places, gather firewood, walk your dog, and ride your mountain bike on any trail. Camping, hunting, and off-roading seem to be the most popular activities.

The national monument has a northern “Hume Lake” unit near Grant Grove and a bigger “Western Divide” unit centered on Camp Nelson. The southern unit has almost all of the old-growth hikes.

Except for the Nelson Trail and the Bear Creek Trail, the sequoias can’t be reached until as late as July, because the roads are closed in the winter and spring. 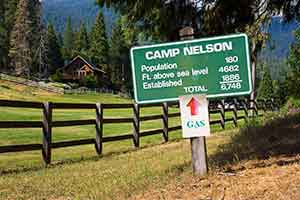 Most of the unlogged groves in the Monument are in this area around the town of Camp Nelson. 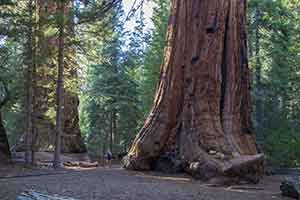 The most popular attraction in the Monument, the Trail of 100 Giants, is a short, paved loop with a lot of really impressive trees. The southernmost sequoia grove has a smattering of old growth, with about ten big trees visible from the trail, most obscured by dense foliage. 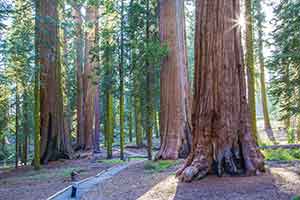 This tiny, isolated patch of sequoias is exceptionally scenic, with a lot of big trees for such a small area. Can’t easily be reached from either the national parks or the National Monument. 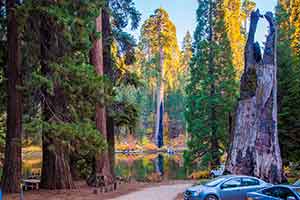 A heavily-logged but very popular grove with a lot of campgrounds.